The precision of genetic tests is increasing fast, as is the commercial interest in offering con-sumers genetic tests to predict their lifetime risk of developing medical conditions. Consumers could use such genetic information to their advantage when they purchase insurance, which could lead to rising premiums. If insurers would underwrite genetic risks in return, this could lead to genetic discrimination. Thus, genetic testing puts the regulatory dilemma between affordable insurance policies and the prevention of discrimination into the spotlight. 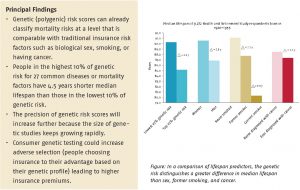 Key Take Aways for the Industry