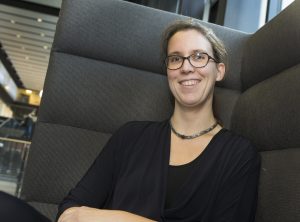 Netspar distributes five thesis awards, sponsored in part by Pensioenfonds UWV, every year to promising young researchers for outstanding TIAS, BSc, and MSc theses and PhD dissertations in the Netspar research program. The winner of the PhD award this year was Marloes Lammers (SEO). “I’m so honored!”

Her dissertation, “Financial Incentives and Job Choice,” explores the effects of financial incentives on job decisions from three perspectives: the effect of household wealth on the so-called acceptable wage (the lowest acceptable salary for taking a new job), the effect of job search requirements on older unemployed people when finding work, and the effect of the transition from final salary to career average schemes on job change.

More Wealth, Higher Acceptable Wage
With regard to the acceptable wage, a small effect was detected among people with somewhat greater assets: they are less likely to seek work and have a higher acceptable wage. One possible explanation for this is that it is easier for them to live off their savings longer. Although that result is in line with expectations, the overall effect was small.

Job Search Requirements Boost Employment Levels among Older Recipients of Unemployment Insurance
A more pronounced result was found in the study of older unemployed workers receiving unemployment benefits. Prior to 2004, people were exempted from the job search requirement once they reached the age of 57 and a half. Starting on January 1, 2004, however, they were required to seek work or risk having their benefits cut. The evidence shows that this measure was effective in getting older people back to work: the number of people who found a new job within two years rose from 31% to 38%. That is a sizable difference. It is worth noting, though, that there was also a considerable rise in the number of older workers receiving disability after these regulations took effect. It would be interesting to study the causes of that and how it affects the overall success of the measure.

Career Average: More Frequent Job Changes
The last section of the dissertation discusses the effect on job changes of the transition from a final salary to a career average scheme among pension funds. Data from the large Dutch pension funds ABP and PGGM were examined for this. “Strangely enough, it was only among civil servants that I found a clear effect; they did indeed change jobs more frequently once the advantageous final salary scheme was eliminated. By contrast, I found no difference among healthcare workers, possibly because they – and this is reflective of society – are less consciously concerned with their pensions. “