Interview: “Annuities form a complex puzzle: procrastination and uncertainty in the way of welfare gains”

Do you want to include all your pension savings in one go, or purchase an annuity that guarantees you a lifelong benefit? In the Netherlands this is not an issue, but in the United States people are confronted with this choice. What lessons can be learned? “The US social security pension provides an inexpensive source of lifelong income. But due to a lack of knowledge, understanding and decisiveness, many people still have their employer pension paid out in a lump sum,” explains Jeff Brown (University of Illinois, Urbana Champaign). “With retirement choices such as taking up a lump sum or retiring early, the stakes are quite high: on average, people can lose 15 to 20% of their retirement income.” 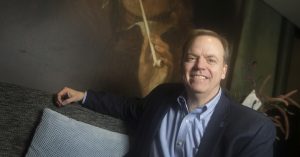 “What makes choosing an annuity so difficult? Brown did extensive research into it. “Even if priced attractively, many people don’t like annuities,” says Brown. “And it is not simply due to bequest motives. There is no single explanation: it is a complex puzzle. In part it has to do with understanding and knowledge: what do I actually buy? The complexity of such a financial choice also leads to concern; people do not want to be taken advantage of. The risk sharing associated with social security pension furthermore means that an annuity is often not seen as an insurance policy, but as a – risky – investment of pension savings. ”

Communication
“For most people, it’s hard to see lifelong benefits in the right context,” Brown continues. “They do not see how the lifetime income fits in as part of their overall retirement plan. And because they do not understand the product well, they only want to pay little for an annuity. The complexity of the product and the way in which it is offered plays an important role in this: adding a little extra complexity to the product explanation leads to a poorer result. Furthermore, research from 2008 shows that framing can play an important role in how people value an annuity. When presented as an opportunity for consumption, the number of people who opted for an annuity increased by 50%, compared to when it was presented as an “investment”. Even just changing a few words in the text can make a big difference in how consumers perceive the value of the product.”

Procrastination
Another problem that arises when it comes to financial choices is procrastination. Brown: “Procrastination is a challenge in the US, since many people who don’t make an active choice in their employer provided retirement plan are automatically paid the lump sum on retirement date. This costs them an average of 15-20% of retirement income. This can therefore be a considerable welfare problem for the entire country. Research shows that procrastinators take longer to participate in a pension plan and invest less. They also prefer to stay in the default and therefore (in the case of the US) do not opt ​​for an annuity. Various studies show that 70-90% of the observed choice behavior can be directly attributed to procrastination.

Policy
Policy makers can take these lessons into account by looking at the default savings amount, since a large group of people will make use of the default. Options that tie in with individual preferences or other characteristics also lead to more choice. Furthermore, it is a good idea to remind people on different occasions about the choice they must make. Although complete freedom of choice is not an issue in the Dutch context, here too social security is driven by process and operation. It remains important to look – with the help of scientific insights – to what extent the system fits in with the lifestyle and life cycle of individuals.”

Interview series
The above synopsis from Jeff Brown is part of a series of interviews Netspar conducted with international researchers during the 2020 IPW. These provide a glimpse into the findings from Netspar’s ongoing global academic research.