Project: Transition to a new pension contract in the Netherlands – Lessons from abroad

“The Netherlands should tell a clear, honest story regarding pensions”

In the coming years, all those involved in the Dutch pension reform will have to communicate a crystal-clear and honest story about the transition to a new pension contract. That is one of the lessons pension experts from the independent knowledge network Netspar have learned after analysing nine other countries that have previously undergone major pension reforms. The situation in the nine countries that were analysed cannot be compared on a one-to-one basis with that in the Netherlands, but there are certainly parallels to be drawn and lessons to be learned. For example, pension reforms often involve high, sometimes unexpected costs because some groups of society are suddenly in danger of being left out. 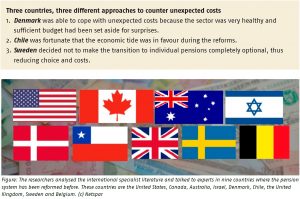 Key takeaways for the industry


Drawing up the bill: Does sustainable investing affect stock returns around the world?

Business Strategy and the Environment