Low interest rates are putting pressure on the returns and coverage ratios for fully funded pension funds. At the request of the Dutch Minister of Social Affairs and Employment, the Netherlands Bureau for Economic Policy Analysis (CPB) and Netspar performed a joint
study on the implications of low interest rates and returns for the Dutch pension system.

It would be wise to take the possibility of long-term low returns into account; younger households will experience the greatest impact from this. Interest rates on government bonds have dropped sharply and the financial markets seem to expect the lower interest rates to persist for a while. While future returns on stocks and other investments cannot be predicted, and these may have suffered somewhat less of a drop, it is still a good idea to make provisions for lower overall investment returns. In the case of young households, that means they can consume less over their lifetime. To prevent a significant drop in income after retirement, they can save more during their working lives. Older households that have already accumulated a significant amount of wealth suffer less of an impact, on average, from a decrease in returns. An environment of long-term low returns will necessitate a new appraisal of pension goals and the saving levels and contributions needed to achieve them.

An inordinate dip in retirement income can be prevented in various ways. People can increase their pension income by saving more or by investing (personal savings or contributing more to fully funded pension plans). Post-retirement income can also be propped up by investing more heavily in human capital (education, long-term employability), which would give people more latitude for setting aside extra money for retirement; moreover, they could then continue working longer and thus build up more pension. Although the introduction of more pay-as-you-go options, such as the internationally emerging notional defined contribution (NDC) pension plan, would not in itself solve the issue of low returns, it could, depending on how it were implemented, have a beneficial effect on the pensions of current generations. We also discuss the value of waiting to undertake any comprehensive system changes, since more information will become
available over time on such matters as the impact of the new pension contract and its level of social acceptance.

Low interest rates factor less into the consideration of fully funded versus pay-as-you-go plans. An important difference between pay-as-you-go plans in the first pillar and fully funded ones in the second is that the returns for non-retired participants in pay-as-you-go plans depend primarily on demographic and macroeconomic developments, whereas fully funded pensions depend heavily on the returns from the financial markets. By sharing in the wage risks faced by working people, indexed pensions contribute to solidarity among the generations on an allocation basis. On the other hand, pay-as-you-go plans through the government are subject to political risks, and pension funds and pension insurers can play an important role in providing risk capital to companies. These elements will eventually determine the choices for an optimal mix for the pension system.

Casper van Ewijk gave a presentation on it at the online After Lunch Working Group Meeting on June 9; the slides from that can be downloaded here. (Dutch only).
CPB Background document by Ciurila, N., 2020, The impact of a lower return on wealth on optimal wealth accumulation 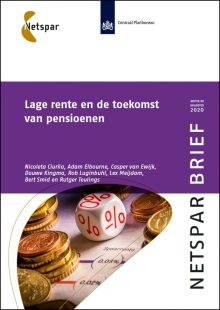 
Frontiers in pension finance and reform: institutional innovation in the Netherlands