Distribution of interest rate risk over the life cycle can occur in various ways. One option is to vary the risk mix over the life cycle. In the world of defined contribution plans, this is known as life cycle investing. In the Netherlands, the so-called WVP contract, for Wet Verbeterde Premieregeling (Improved Defined Contribution Scheme Act), also falls into this category. That is one of the contracts that has received particular attention in the pension agreement.

Yet, risk is also distributed over the life cycle in plans with uniform collective assets, such as the well-known “FTK contract” (named for the Financial Assessment Framework at its core) that most industry pension funds and occupational pension plans now use. Under that contract, the assets are pooled, and a common investment policy is used for the fund as a whole. Setbacks and windfalls are distributed by looking at the funding ratio, which is a function of the ratio between a fund’s assets and its liabilities. Because of the central role played by the liabilities, these types of plans are also called “entitlement contracts.”

For equity risk, the implicit life cycle appears to align reasonably well on average with the recommendations from the academic literature. Young people bear relatively more equity risk than older people. This is consistent with life cycle theory, as well as professional practice in existing DC plans.

What lessons for the future might be derived from this? First, interest rate risk is different than equity risk and should thus be allocated differently over the lifetime. Second, the “ideal” pension contract needs to be able to accommodate this difference in types of risk. A pension contract should contain enough “switches” for properly distributing risks among participants, young and old. An added complication here is that the allocation also differs per fund, according to such factors as age composition. A younger fund might need a different form of risk sharing than an older one, and the same holds true for funds with a homogenous membership base versus those with a highly diverse group of participants (in terms of age or other factors). An ideal pension contract must thus also be able to take this diversity among funds into account. 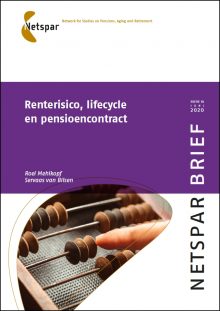 
What is the value of "collective" in collective DC?