Project: The causes and consequences of retirement: a sociological perspective

Sweeping measures have been enacted in recent years to encourage people to work longer. Laws permitting early retirement have been phased out, and the social security entitlement age is being raised incrementally. Despite the fact that these measures apply to all workers, there are noticeable differences in the age at which workers retire (or wish to retire). This Netspar Brief explores what employers, employees, and independent contractors think about working beyond the retirement age.
Employers are not eager to keep older workers on their payroll. There is, however, growing awareness about the implications for organizations of our aging society. This has proven cause for concern. Employers are most concerned about the limited employability of employees with health problems. In the industrial/construction sector, 55 percent of employers are concerned about this; in the service sector, that number is 40 percent and in the public sector, 35 percent. The second-greatest worry pertains to workers’ physical ability to continue working to retirement. This is counterbalanced by employers’ greater proactivity in recent decades in offering education, training, and flexible work schedules to prevent older workers from dropping out of the workforce for extended periods of time.
Today’s crop of older workers (age 60-65) shares these concerns on the part of employers. Approximately 40 percent are worried about being able to continue working until they reach retirement. Many older workers would prefer to retire at a much younger age than what is allowed under the current policy. The gap between the average desired age of retirement (63.4) and the expected age of retirement (65.7) is considerable: 2.3 years. In the construction industry, that gap is even higher (2.8 years).
Independent contractors show a greater eagerness than employees under contract to continue working until a ripe old age. About 20 percent of independent contractors (age 45-65 in 2016) want to continue working past the age of 67, compared to 3 percent of other workers. While their more limited pension savings presumably have something to do with this, work characteristics such as greater flexibility appear to also play a substantial role.
As a whole, this study of employers, employees, and independent contractors shows that the thinking about working beyond the retirement age varies greatly both between and among these groups. It does nevertheless provide some clear indications for certain sectors. For physically and mentally demanding professions, in particular, the discrepancy between desire and reality – for both employers and employees – appears to be considerable. This is one area in which the government and social partners might play a role, for example by further promoting retraining and upskilling programs. 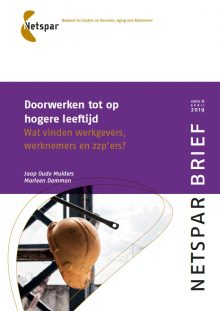 
The use of data in the pension market


How trust in politics and society affects trust in pension institutions