Netspar Brief 14 – Who Will Care and Pay for the Seniors of Tomorrow?

Older care in the Netherlands is collectively financed for the most part. Compared to the surrounding countries, informal care and paying out of pocket are fairly limited. That extensive collective financing, combined with other regulations, has produced a situation in which the elderly have relatively few financial problems. In recent times, though, greater emphasis has been placed on individual responsibility and self-reliance. There are advantages and disadvantages to both additional collective financing and a greater emphasis on individual responsibility.

In this Netspar Brief, we examine the two primary ways in which individual responsibility for elder care currently manifests itself: informal care and out-of-pocket payments. Based on recent Netspar research, we describe how an increasing reliance on these two options results in a different distribution of the burden across demographic groups. We also explore a number of policy options for alleviating that burden, if desired, for groups bearing a relatively greater share of the individual care provision and for better distributing the costs of elder care throughout a lifetime.

Greater reliance on informal care means that the costs and burden of such care lands with the people providing it. In the Netherlands, this has led to predominantly negative health effects; due to the generous collective system of formal care, the costs in terms of lower workforce participation have remained limited, however. Higher out-of-pocket costs mean that the elderly who need care bear a greater share of the burden overall. Since older people with limited financial resources use the most healthcare, on average, they bear the primary burden for higher out-of-pocket costs.

The growing costs for elder will have to be distributed among contributors and taxpayers, care recipients, and informal caregivers. Each of these ways of arranging and paying for elder care has its own advantages and disadvantages, so there is no simple solution. Further policy measures could ensure that certain groups are spared the worst and provide for a better distribution of care provision and care costs across the lifespan. The former could be accomplished, for instance, by tying any increases in out-of-pocket deductibles to income and assets, such as is now the case. Better distribution will require, among other things, allowing older people to actually tap into their financial assets when they need them, for example by enabling flexible withdrawals from pension and retirement accounts. 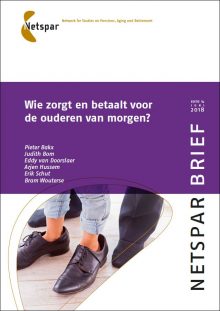 
Assessing heterogeneity in the health effects of social pensions among the poor elderly: evidence from Peru