This brief considers what the Netherlands can learn from funded pension systems in other countries. The roles of the government, the social partners and the individual differ from one country to another. We examine four prototypes: the Provident Fund model (Malaysia, Singapore) which is marked by extensive government regulation; the Social Partners model (the Netherlands, Switzerland, Scandinavia) which entails a combination of government regulation and self-regulation by the social partners; the Regulated Choice model (Australia, Chile) in which governments impose a mandatory savings obligation which is then administered by private sector providers, and the Induced Choice model (New Zealand, UK, USA) which allows considerable room for individual choice although decisions can be influenced by the inclusion of standard preferred options (‘defaults’).

The most important conclusions 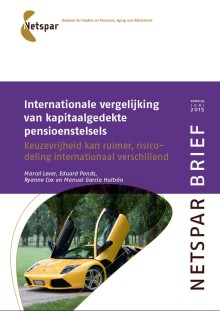