Off to a good start with a new pension system, but we still have a long way to go

The new pension system that takes effect around 2026 is better attuned to the labor market than was previously the case. Still, lower-educated people, mothers with small jobs, migrants, people who perform repetitive tasks, and workers with physically demanding occupations are at risk. That is the conclusion of an exploratory survey for the longer term published today by a group of scientists and experts from the pension sector of the knowledge network Netspar.

The continued flexibilization of the labor market and an aging population require further adjustments, according to the experts. They state that it is important to invest more in career development, skills and in sustainable employability. This also includes a more flexible, more dynamic pension that takes better account of longer and varied careers.

In the exploratory survey, the experts introduce the term ‘socially acceptable minimum supplementary pension’, abbreviated to MAP in Dutch. If it was up to the authors of the survey, the entire working population, self-employed entrepreneurs and temporary workers therefore included, would be obliged to accrue a small supplementary pension on top of the state pension (AOW). Something similar is already set in place in Sweden, for example. A different, less obligatory form is the British model where, in principle, every worker is automatically a participant in a pension scheme but can stop or change the participation. 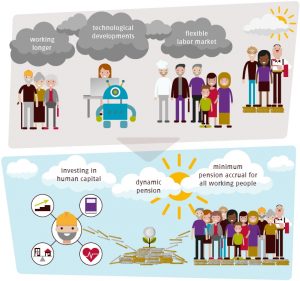 When referring to a more dynamic pension, the authors of the survey mean that the pension accrual need not be so strictly regulated. Young families who have just purchased a home could, for example, be given the option to temporarily set aside less pension contributions. By contrast, those not working, for example, if they are retraining or if they are providing long-term informal care, should be given the option to continue to accrue a pension.

The experts warn that a good pension system cannot exist without good labor market policies. They refer, for example, to risks related to an aging population, to less educated people who increasingly form part of the flexible non-core workforce, and to women with young children who earn less for a longer period of time and therefore also accrue less pension.

Casper van Ewijk, researcher at Netspar and Professor Emeritus of Macro-economics at the University of Amsterdam: “You can have the best possible pension accrual set up in theory, however, if people do not have a job, they do not accrue any pension.”

The investments in lifelong learning pose another risk, thus the exploratory survey for the longer term. Working people often cannot bear the costs themselves or do not look that far into the future. And as for employers, they might not want to invest because their employees frequently change jobs and so it brings little benefit to the employers. According to the experts, this market failure can be solved by the social partners and the government.

Co-author Ton Wilthagen, Professor of Labor Market Studies at Tilburg University: “For example, the social partners can already offer workers a so-called free financial MOT, whereby workers take a comprehensive look at their future financial situation every ten years and gain a better insight. In addition, the government can provide tax advantages to companies that invest in sustainable careers. The government can also ensure that companies and workers may spend a small portion of the pension fund towards education and career development.”