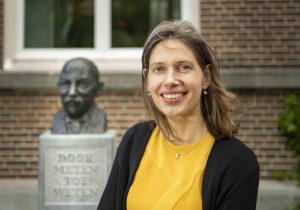 Wouter Bos, chairman of the Supervisory Board; “We are delighted to be able to appoint Marike Knoef as a director for Netspar. Marike’s research into the adequacy of pension for households and into pension communication is at the heart of the Netspar research agenda. In recent years, Marike, as a member of the Netspar board, has shown that she has an explicit eye for the necessary balance between science and practice, and for the importance of authority and “neutrality” in the pension debate. Marike also knows how to make complex research material accessible to a broad audience, including in the media. It was also of great importance to us that we were able to establish a large amount of support among employees and other stakeholders for the appointment of Marike during the application procedure.
And although Casper van Ewijk will remain in office for the time being, this is already a moment to express our thanks. Casper has also been able to obtain support for sufficient pension research during economically difficult times. Moreover, research that is seen as authoritative, high-quality and application-oriented, according to the most recent evaluations by NWO and the partners in 2018. The emphasis has shifted more towards the pension participant and a broadening of disciplines has taken place alongside the economy. These are important ingredients for Netspar’s continuity towards the future. We will of course say goodbye to him appropriately by the time Casper really leaves.”

About Netspar
Netspar, Network for Studies on Pensions, Aging and Retirement, is a think tank and knowledge network. Netspar encourages a better understanding of the economic and social consequences of pensions, aging and ‘old age’ in the Netherlands and Europe. Netspar actively contributes to the social dialogue between policy makers, academics and pension and insurance practice through knowledge development through independent scientific research and knowledge sharing through publications, events and education.

For more information or interview requests, please contact the communication officer at Netspar via +31 13 466 2685.