Tilburg University has appointed Marike Knoef as endowed professor of Capital-Funded Pensions at the Tilburg School of Economics and Management, effective July 1, 2021. Marike Knoef is director of Netspar, professor at Leiden University and Crown-appointed member of the SER.

The remit of the chair is the study of capital-funded pensions from an integrated perspective to contribute to the formation of ideas about the future of supplementary pensions in the Netherlands. The institution establishing the endowed chair is Instituut Gak. The research is part of the research program of pension network and think tank Netspar.

Capital funding
The Netherland has extensive experience with capital funding in the context of supplementary pensions. In a capital-funded system, the pension contributions paid are immediately invested. In this way, the pension fund builds up the capital that is needed pay pension benefits to the participants later. The Dutch pension system is under pressure as a result of an aging population and low interest rates.

Insight into individuals and households
Currently, the Dutch pension system is being reformed. Academic research is indispensable for the implementation of this reform and for an integrated approach to the financing of retirement. This chair is aimed to contribute to this by providing more insight into the economic behavior of individuals and households. “It is important to collaborate with other disciplines such as psychologists, lawyers, and communication experts,” Marike Knoef states. 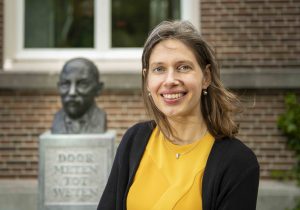 Marike Knoef is Professor of Empirical Micro-Economics at Leiden University (since 2018) and the director of Netspar (Network for Studies on Pensions, Aging and Retirement) since 2020. In 2006, she completed her MSc in Mathematical Economics & Econometric Methods at Tilburg University and obtained a PhD in 2011 at the same university. Knoef is a Crown-appointed member of the Social and Economic Council (SER). (c) Frissewind / Don Wijns [CC BY-SA]