As the state pension age rises, the proportion of older workers experiencing non-fatal health problems that influence their ability to work might increase despite an overall improvement in the general population’s health. However, obtaining an accurate picture of the situation is difficult because the outcomes observed are influenced by the health indicators used and the educational level of the workers. This study used a variety of health indicators to determine whether health improvements occurred in the period 1989-2018 in different health indicators and among older persons with different educational levels. 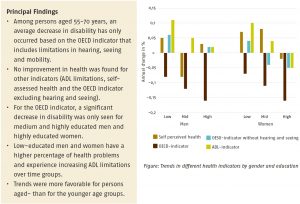 Key Takeaway for the Industry